The origin of the domestic cat (Felis domestica) is a subject about which there has been much conjecture and scientific discussion, but without any positive issue. Very long before the cat was kept in this country as a domesticated animal it was possessed by the ancient Egyptians in a tame state, and was, moreover, held in reverence by that remarkable and superstitious people, being regarded sacred to the goddess Pasht. At death the body was embalmed with devout care, and specimens of cat mummies may be seen in the British Museum. The Egyptian cat (Felis maniculata) may, however, be regarded as probably the original source of our familiar puss. This wild cat is of a sandy-grey or tawny colour, and with more or less indistinct markings of the tabby character. It is of about ordinary size; the tail is in form somewhat like that of most of our cats, and the ears are largish and pointed in a slightly lynx-like fashion. It is supposed that domesticated animals spread from Egypt with the tide of civilization westward. I may here notice that, unlike the dog, the cat has never been tamed by the savage races of mankind. But by the civilized, or even the semi-civilized, peoples of the world the cat is at the present day more or less valued as a useful mouser or as a cherished household pet. It is remarkable that at a time when the wild cat (Felis catus) was very abundant in England, the house-cat was unknown. It was evidently an animal of foreign importation, and so highly valued as a mouser as to have been protected by royal statute. The earliest record of the tame cat in this country is as remote as a.d. 948. Prince Howel Dda, or Howel the Good, enforced the very just but primitive fine of a milch ewe, its fleece and lamb, or as much wheat from the destroyer or robber of a cat at the Royal granary as would cover it to the tip of the tail, the animal being suspended by that member, with the head only touching the ground.

As the domestic cat in different parts of the world will breed occasionally with the wild races of the locality, and as cats are conveyed from country to country, it is probable that our cats are of somewhat compound pedigree. It is considered probable that our fine English tabbies have a trace of the British wild-cat blood in their veins, although it may be obscure. The domestic cat is not regarded in zoology as the typical form to represent the beautiful group known as the Felidæ, or the cat family, as might naturally be supposed; and it might have justly been so. But the animal chosen as the generic example is the common wild cat, and therefore known in science as Felis catus, felis being the generic title and catus the specific name, which every reader will understand to signify cat. It will be beyond the scope and aim of this chapter to describe all the known distinct species of wild cat. In describing the true cats, such as the Pampas cat, or the Colocolo of America, the Chaus, or the Serval of Africa, the Viverrine, or the Leopard cat of India, our subject would lead us on from these and other "tiger cats, as the Ocelot, and the Riman-Dahan, without power to define a clear line of distinction, up to the leopards, and finally to the "King of Beasts himself. Of all these Felidæ there are upwards of half a hundred distinct species known, to say nothing of the permanent varieties which, with regard to domestic animals, are termed "breeds and the casual "sports, and variations of colour, etc. But the true wild cat (Felis catus) is deserving of notice, being the only form that is a native of this country, and often termed by us the British wild cat, although now almost totally extinct on our island. Its last haunt here is in the remote parts of Scotland; and so scarce has it become, that its existence, even there, is now somewhat doubtful. But it is still now to be found, with but slight local variations, on the continent of Europe and Northern Asia, and is, therefore, also known as the European wild cat. It is not found very far north, and neither in Norway nor Sweden; there the lynx reigns supreme. The wild cat is a fine animal, of larger growth than the cat of our familiar acquaintance, and stands tall. It is a strong, muscular, well-built cat, a perfect tabby, and so fierce an animal as to have been justly termed the "British Tiger. An adult male measures about twenty-eight inches in length from the nose to the root of the tail, and the tail is about thirteen inches, which is proportionately short, and it does not taper at the end, as does that of our domestic cats, but is about the same thickness throughout, resembling somewhat that of the Serval. When the animal is excited, and the tail enlarges, after the manner of all cats, it presents a splendid brush. 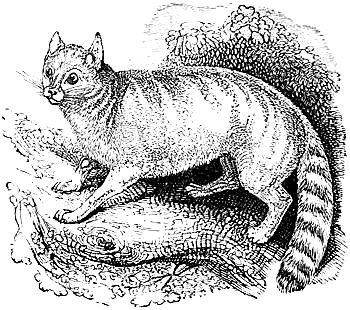 In country places, where rabbits are abundant, and, we may add, the smaller, but not less destructive, rodents, and a variety of feathered game, the barn-door cat is sometimes tempted to abscond and take to a romantic and semi-wild life in the woods. Kittens born of such parents have no desire for the domestic hearth, and are wild and suspicions to a degree. Were it not for the vigilance and unremitting persecution of gamekeepers and others, which has robbed our land of the noble Felis catus, in common with many other rare and interesting creatures, it is probable that but very few consecutive generations would suffice to produce a truly wild race.