I shall now tell you about other felines or animals of the Cat Tribe. The lion looks the grandest of all such animals I suppose just because he has a mane.

Most lions live in Africa. There are some lions in Arabia and Persia, which are the two countries in Asia nearest to Africa. A few lions are also found in a jungle on the west side of India. These lions in the countries of Asia are not as big as the African lion.

Then there is also a species of lion in America, though he has no mane. He is called the puma; but people in the Western states often call him a cougar or mountain lion.

The puma is found chiefly in North America; he is also found in Central and South America, but not so often.

In the United States the puma lives mostly in the mountains of the Far West. He is very fond of deer flesh; and as there are still plenty of deer in the forest reserves in the Far West, the puma has managed to survive there. But in the Middle West, where there are fewer deer, there are hardly any pumas. 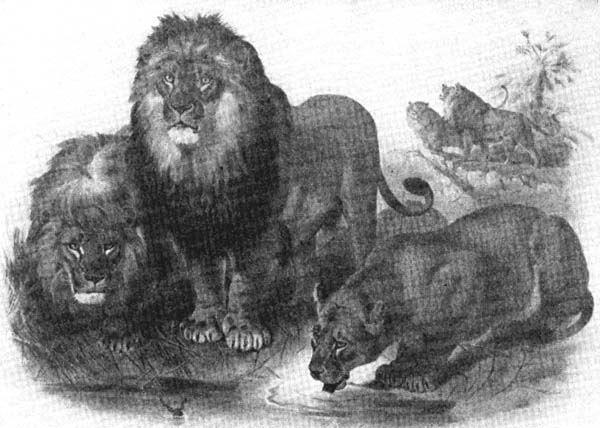 The puma is seldom able to attack cattle. But when pressed by hunger in the winter, he sometimes descends from the mountains to the plains below, and tries at least to steal sheep from the farms.

The puma usually avoids men, especially as the men there often carry guns. But still, when made desperate by hunger, the puma has even been known to attack a man on a lonely farm.

The African lion grows to be about three feet six inches high at the shoulders; but his big head stands up quite a foot higher, and makes him look very imposing. His body, without the tail, is about five and a half to six feet long. So the African lion is not quite so long as the Bengal tiger. Still, the lion is a splendid specimen of the Cat Tribe.

"But why is the lion a member of the Cat[132] Tribe at all?" you may ask. "The lion does not look like a cat. The tiger does look like a cat, though much bigger than an ordinary cat."

That is quite true. But still the lion is a true cat. Why?

The Lion has the Fangs, the Tongue, the Claws, and the Paws of a Cat

Now I shall describe these four things as possessed by the lion or lioness.

Also, in chewing his food, the lion uses his fangs in the same manner that the tiger does. The lion, too, has ordinary teeth, besides the fangs. So the meat lies on the lower teeth, and the upper fangs come down on the meat and pierce it. And just like the tiger, the lion, too, needs to chew his food only a few times, as the lion also has a strong digestion.

But in one thing the lion uses his fangs in a different manner from the tiger. In killing a weak prey, such as a deer or an antelope, the lion usually bites it with his fangs on the back of the neck. The tiger seldom kills his prey in that manner. As you will remember, the tiger usually kills an animal by striking it with his paw; and if he uses his fangs at all to kill the prey, he seizes it by the throat and bites it there, not at the back of the neck.

The second catlike quality that the lion has is that his tongue is rough. He can use his tongue, as the tiger does, to scrape off small pieces of meat from a bone.

The third quality of the lion like that of other cats is that the lion's claws also are retractile: that is, the lion can draw in his claws, or thrust them out, just as he pleases.

The fourth quality the lion has like all other felines is that his paws also are padded with thick muscles underneath. So the lion, too, can stalk his prey silently, or harden the muscles to strike down and stun the prey with his paw, or use the muscles like springs in leaping as I have already described to you on pages 71-72. The lion can run with a series of leaps or bounds, like any other feline.

But there is a fifth quality which all felines have, though I did not mention it before, because a few other animals also have it. This quality is that they have sensitive whiskers. You have noticed the whiskers of an ordinary cat. If the cat were asleep, and you touched a hair of the whiskers, the cat would wake up at once. Why? Because each hair of the whiskers is very sensitive.

All felines have sensitive whiskers; that is, each hair can feel any object it touches. This is a very useful quality in a feline in going about in the jungle, especially in darkness; for then the whiskers give warning of any object close at hand, by just touching it.

But, as I said, a few other animals besides felines have sensitive whiskers.

In the same manner there is another quality which all felines have, as well as a few other animals. And that quality is to be able to see in the dark.

But it must not be totally dark. It is a mistake to suppose that a cat can see in absolute darkness. No animal can. For a cat or any other feline to see, there must be at least a tiny bit of light even if the light is not sufficient for a human being. The eyes of the Cat Tribe are formed in such a manner as to catch the tiniest bit of light.

That is why the lion, the tiger, and all other felines can see at night in the jungle. For there are usually a few stars visible, even when there are passing clouds. Or, if the whole sky is covered with one big cloud, then the cloud itself may reflect a little light coming from various parts of the land.

But, as I said, a few other animals besides felines are able to see in partial darkness. These other animals are also night feeders or night prowlers such as the deer, the antelope, and the hyena.

Lastly, I ought to mention one special quality which all felines have at least they possess it more than other animals. And that is the quality of cleanliness. You have noticed a cat licking itself to keep clean. A lion and all other felines do that. A lion even keeps his face clean. And as he cannot lick his own face, he uses his paws to clean it just like an ordinary cat.


How the Lion is Different from Other Cats

I have told you the many qualities which the lion has like all other animals of the Cat Tribe. But can you see in what qualities the lion is different from all other felines?

I shall tell you. First, the lion has a mane; that is, the male animal has; the lioness has no mane. No other member of the Cat Tribe, male or female, has a mane.

Also, the tail of the lion has a tuft of hair at the end; no other animal of the Cat Tribe has the tuft.

Moreover, the tail of the lion or lioness hangs straight out from the body; it is not naturally curled, like the tail of the ordinary cat or other feline. But of course the lion can curl his tail for a moment, if he wants to, for instance, in order to whisk off a fly.

I shall now describe to you more fully these special qualities of the lion.

The lion's mane is composed of long, bushy hair. The hair grows all around his neck, and upon his shoulders. It begins to grow when he is three years old, and continues to grow till he is about five years old. A shorter growth of hair extends to the under part of the body of those lions that live in colder regions.

You may have read in your geography that in the interior of Africa there is a table-land, a part of which is about 6,000 feet high. There it is generally cold, and especially at night. So, to protect them from the cold, the lions that live there have a much thicker mane and more hair on the under part of their bodies than the lions that live in the hot lowlands nearer the sea.

When the lion lives in forest regions where there is plenty of vegetation, his mane is usually brown in color and much darker than his tawny yellow body. Why is that? Because the vegetation has both dark and yellow patches, and so the lion looks very much like his surroundings, and finds it easier to stalk his prey without being detected.

But when the lion lives in sandy or stony regions, the color of his mane is more like that of his body, that is, yellow; so he appears to be very much like the color of the sand or stones around him.

Once a lion and a lioness were drinking the water from a little pool in the stony region. Two hunters happened to approach the place from behind a large boulder. They were standing about twenty yards from the lion and lioness, and yet they could not distinguish the animals. They heard the lapping of the water, and that is how they knew that the animals were somewhere close to them.

As for the tuft of hair at the end of a lion's tail, nobody seems to know why the lion has that tuft. The end of the tail has a hard nail, or claw, and the tuft of hair may be meant to enclose the nail, and to prevent it from being worn out against the ground. But nobody seems to know why the nail itself is there, as the lion never uses it now. Perhaps the nail had a use many generations ago, and the lion has forgotten that use now.

The tail itself, as I have already told you, hangs down straight, and does not naturally curl. It may be so because the lion does not use his tail constantly, as other animals of the Cat Tribe do, such as the tiger and the leopard. Why? Because those other animals live in denser jungles, and so they constantly use their tail as a feeler; that is, as the animal walks through the jungle his tail feels the objects which it touches, just like a hand; and in that way the tail gives warning of any danger coming from behind. So these felines that live in the dense jungles have got used to keeping their tail stretched out like a hand; and the tail is curled upward so as not to rub against the ground.

But as the lion usually lives amid scantier vegetation, he does not need to feel his surroundings quite so constantly; and so his tail has lost the power of curling itself upward.

Of course, the lion still uses his tail to express his love or hate, as many animals do. He can express his affection by wagging his tail, just like a dog, though he seldom has any reason to show his affection for men; a tame lion, however, has actually been known to do that. But he may very often have reason to express his anger, in fact, whenever a hunter tries to kill him. Then the lion lashes his tail in anger from side to side, before leaping at the hunter.