The leopard is another animal of the Cat Tribe. You may know him at once by the spots on his body; and of course the female leopard also has the spots. These spots are usually black in color, or sometimes very dark brown. But the color of the body, or "ground color" as it is called, is different among the several kinds of leopards.

Now I shall describe in detail all the qualities of these different kinds of leopards.

First, as leopards are felines, they have the fangs, the tongue, the claws, and the paws of the Cat Tribe, which I have already described to you.

The Leopard's Ground Color and Spots

The ground color of the leopard's skin is usually yellow, but the shade of yellow varies in different leopards; sometimes it is a bright yellow, sometimes a brownish yellow. There are leopards whose skin is even darker than that, some actually black.

"But why do different kinds of leopards have different ground colors?" you may ask.

Now I shall tell you about his spots, which are always of a dark color. But they vary in shape in different kinds of leopards. In some leopards the spot is a solid round disc, like the shape of a coin.

In other leopards the spot is like a thick ring; that is, there is a gap at the center. In some leopards the ring is broken up in parts; that is, the ring is not a complete line, but is made up of a number of short lines. The spot then looks like a rosette, because these lines spread outward like rose petals.

All these that I have just mentioned are regular shapes. But in many leopards the spots are quite irregular.

The spots also vary in size. In some leopards the spots are larger than a silver dollar, and in some they are as small as a quarter-dollar.


Why the Leopard has Spots 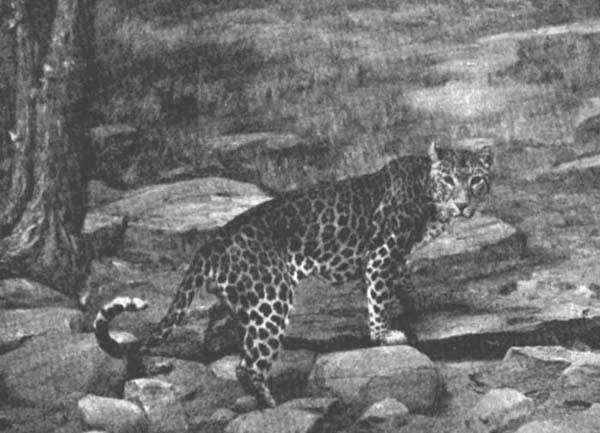 First, I must mention that all leopards can climb trees, just like cats. People believe that once upon a time lions and tigers could also climb trees. Of course, they climbed only big trees, which have a very thick bark into which they could dig their claws deep enough to bear their weight. But now the lion and the tiger have forgotten how to climb trees. Perhaps they did not keep up the use of their power to climb trees. 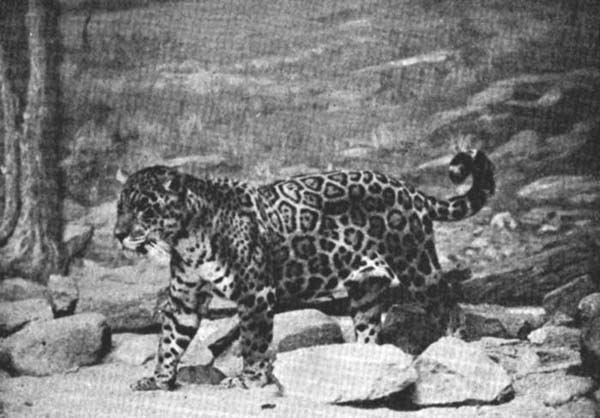 But the leopard has kept up his habit of climbing trees. In fact that is the way he usually catches his prey. Does not that seem wonderful? I shall explain how he catches his prey in that way.

He chooses a tree near a stream, or near a pool of water, where different animals come to drink. The leopard climbs up to a bough of the tree, about ten or twelve feet from the ground. He lies flat on the bough and waits.

Presently a deer comes to the water to drink. The leopard waits till the deer is quite near, perhaps actually passing under the bough. Then suddenly the leopard jumps down on the deer and catches it.

Because when the sun or the moon is shining, a little of the light peeps down between the leaves of the tree and reaches the ground. Have you ever noticed that? If so, you have seen that the light reaches the ground like little bright spots, but that there are little dark spots also the bright spots being the little patches of light peeping down, and the dark spots being the shadows where the light is shut off by the leaves.

In the same way there are bright patches and dark patches on the bough of the tree, where the light also falls in that manner.

So if the deer did happen to look up to the bough when approaching the tree, it would not be able to distinguish the leopard from the natural patches of light and shadow near by. So the deer would not notice the leopard, and would be caught.

And that is why the leopard finds his spots so useful to him in catching his prey.