Now I shall tell you about an American leopard. He is called the jaguar. He lives mostly in Central America and South America. His favorite country is Brazil, near the Amazon and other rivers that flow into the Amazon.

He has all the qualities of other leopards that I have already described to you. But his spots are a little larger and not quite so completely round; they are more nearly square, with rounded corners.

All four-footed animals can swim naturally in some fashion, but leopards can swim especially well. And the jaguar, who lives near the Amazon and other rivers, is a champion swimmer. He swims as easily as he climbs trees. So he eats fish as often as he eats monkeys!

Yes, he actually catches a monkey sleeping on the bough of a tree! He climbs up so silently that the monkey does not awake. At least, those monkeys that do not cultivate the keenest sense of hearing, even in their sleep, get eaten by the jaguar. But a jaguar that is clumsy in his movements awakes the sleeping monkey and then that jaguar has to go without his dinner. So, again, life is like a competition or trial in the jungle, as I have told you in Book I, pages 118-119. Those animals that cultivate their gifts escape their enemies and they get enough to eat. Those that do not cultivate their gifts are either killed by their enemies, or are themselves starved to death.

The jaguar is very fond of monkey for his dinner, just as you are fond of roast turkey. The things he likes next best are fish and turtle. He catches a fish by pouncing on it from the bank. Turtles that he finds on the bank he merely turns over on their backs, so that they cannot run away. Then he leisurely scoops out the flesh with his paws and eats it.

But when the jaguar is in the water pouncing on fish, he in turn has an enemy that wants to eat him. When the jaguar has pounced on a fish, a silent snout may come up to him from behind and grab him! Yes, an alligator! And the alligator needs only to hold the jaguar in his jaws, and drag him down, and keep him under water till the jaguar is drowned. Then the alligator can have jaguar flesh for his dinner.

Here again we have an example of competition in the jungle. The jaguar must cultivate not only quickness in catching fish, but also his own sense of hearing, so as to escape from the alligator in time.

"But what about the alligator?" you may ask. "Doesn't he need to cultivate some gift to escape his enemy? Is there no enemy that tries to eat the alligator in his turn?" 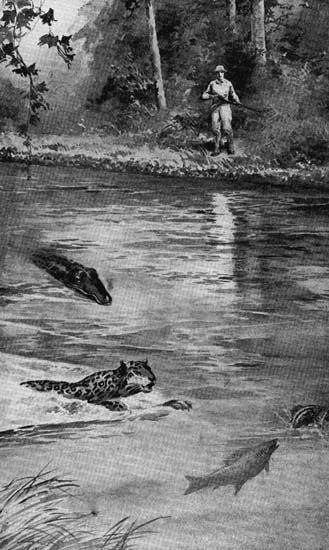 The Chain of Conflict in the Jungle

You can understand the whole story by supposing that there are in that place:

A bigger fish comes, and eats the small fish. But the bigger fish also must look out for its own danger. Otherwise:

The jaguar comes, and eats the bigger fish. But the jaguar also must look out for his own danger. Otherwise:

The alligator comes, and eats the jaguar. But the alligator also must look out for his own danger. Otherwise:

The hunter comes, and shoots the alligator.

So you see that the animals that dwell in the jungle have to cultivate all their gifts to get on in life.